skip to main | skip to sidebar

The Journey To Vertigo 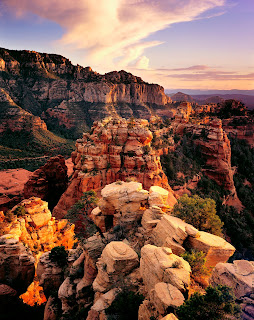 Finding new compositions can definitely be challenging especially in places that are shot by so many photographers. I thought I would share a way that may help you with your search for something new as it helped me. This can start with your current images right on your computer. I shot an image titled Technicolor about five years ago now and always loved the image, in fact it has become fairly well known around here as it is now running on the cover of the Experience Sedona magazine for the third straight year! Well about two and a half years ago while I was looking at the image I began to realize that there was a lot of very interesting landscape features within the image and decided that there had to be another completely different shot somewhere within the boundaries of this composition, and I don't mean by merely cropping the image, I mean by actually traveling by foot into a location that is part of the this image. So I set out to where I believe there was something new to photograph and there it was, a very special and also different composition within Technicolor that I had taken years before. Once I found what I thought was a potential composition I started to go through what are my steps in creating a new edition. There was a trip in just average lighting to get a few sheets of film exposed with different focal lengths of lenses plus slight variations on the angles and proportions. Then I would process them put them and put them on my light table and analyze what I had done to see what the right thing to do was for the final shot. Once I had settled on the shot and the lens required to capture it, now began the search for the right conditions, this entailed a series of trips to see the light develop at sunrise and sunset. Then after deciding on sunset it needed something else for that finishing touch, and with most shots that include sky, this was clouds. I got lucky on this image it only took me about four trips to capture the magic.
Posted by iw photo at 9:10 AM 1 comment:

iw photo
Always following the light in hope of creating a true work of art.